Who is Lord Chaitanya? 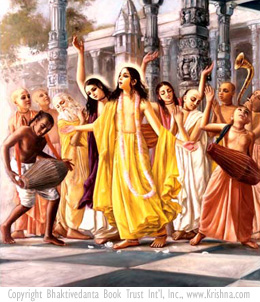 Chaitanya Mahaprabhu (or “Lord Chaitanya”) is an incarnation of Krishna who appeared in Nadia, West Bengal, India in the 15th century A.D.

When Krishna spoke Bhagavad-gita to his devotee-disciple-friend, the military commander Arjuna, on the battlefield of Kurukshetra around 3,000 B.C., He exhibited all the power and majesty of God Himself. His final instruction to Arjuna was that surrendering to Him is superior to all other religious duties.

Fast-forward to late fifteenth century West Bengal, India. The world has had forty-five hundred years to ponder (and mostly forget or ignore) Krishna’s appearance and instructions. Krishna’s advice (“surrender to Me”) still stands, but few know how to put it into practice.

The “Renaissance” in Europe (regarded by Shakespeare as the “second fall” of mankind) heralds the beginnings of a new, secular age. Traditional religion increasingly goes out of favor, and a new generation of intellectuals is on the rise. Chaitanya Mahaprabhu then appeared, as predicted in the Bhagavad-gita itself:

“Whenever and wherever there is a decline in religiosity, and a preeminent rise in irreligion, at that time I descend Myself.”

In His youth, Chaitanya was known as Nimai Pandit. He gained early fame as the world’s preeminent scholar of the Vedas, able to defeat by logic and argument any philosophical opposition.

The next phase of His mission was to popularize the public chanting of the Hare Krishna mantra:

According to many references in the sacred teachings of the Vedas, chanting this simple mantra is the most highly recommended means of achieving spiritual perfection available in the modern age.

Essentially, Lord Chaitanya is the Supreme Personality of Godhead Himself, appearing as His own devotee, teaching how to best practice Krishna consciousness by His own most authorized example.

He debated with some of the most respected Vedic scholars of His day—Kesava Kashmiri, Sarvabhauma Bhattacharya, and Prakashananda Sarasvati. Caitanya was able to convince each one of them that the worship of the Personality of God is superior to any other philosophical system.

He also challenged the religious establishment by emphasizing spiritual equality of all living beings, insisting that anyone can become a devotee of Krishna—and even a spiritual master—regardless of social position, caste, or even species.

His unique position as Krishna appearing as His own devotee has another component, which is that He wished to experience the most sublime spiritual emotions of Srimati Radharani—Krishna’s own internal potency and greatest devotee. As a result of experiencing such uncommon spiritual ecstasy, Chaitanya Mahaprabhu often manifested extreme bodily symptoms that are almost unbelievable.

Thanks to the extensive notes taken by Lord Chaitanya’s chief associates during His brief (forty-eight year) lifetime, the devotee-author Krishnadas Kaviraj Goswami was able to compile a biography of Lord Chaitanya’s later years and teachings, entitled Chaitanya Charitamrita. This epic, multi-volume work explains the most advanced teachings of God consciousness, or Krishna consciousness.